How to Change Permissions and Owners via Command Line 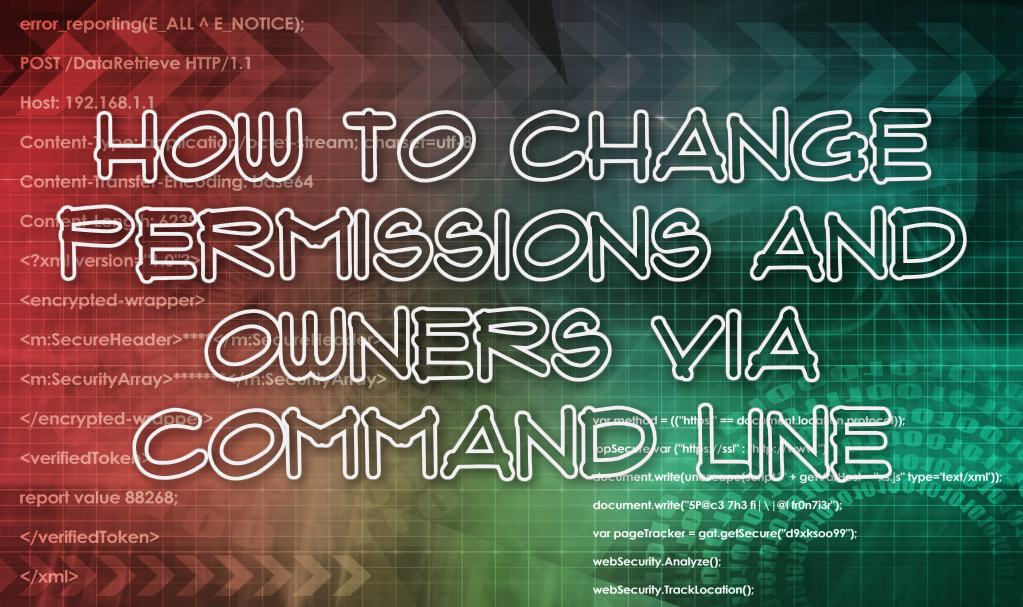 How to Change Permissions and Owners via Command Line

In this tutorial, we will teach you how to change file or folder permissions and owners using a command line on Linux or Unix systems. There are two simple commands that can be used to accomplish this task; they are Chmod and Chown.

For this guide you will require the following:
– Access to the command line

Chmod is a command that is used to change the permissions of a file or a folder.
Simply put, each file has three types of users who can interact with it:

The command ‘ls -1’ can be used to view file permissions and owners of a file or folder. For example, ‘1s and -1 file1.txt’ will display:

‘-rwxr–rw-‘ - This is the part of the line which shows permissions. There are 4 main letters which you will usually see in this part of the line: r,w,x,d. The letter ‘d’ means that the type of the file is a directory.
1 –  This is the number of hard links. A hard link is just an extra name for a file which already exists.
User user – This helps you view who the owner and group owner of the file is.
0 – This shows how big the file is.
Jan 19 12:59 – This is the date of the last edit.
File1.txt – This shows the name of the file or folder.
Let’s return to the command ‘Chmod’. This command grants us the ability to change the permissions of a file or  folder. We will show you how to do this by simply appending numbers. Each permission type will have its own number:

For example, if we would like to set the permissions of ‘file1.txt’ to those:

We would have to type the command:

Every number in the command represents a permission for one of the user types, such as the owner, group owner, or others.
‘chmod 777 file2.txt’ is a different example, this command will grant every permission for every type of user (owner, group, or other).
This is a list of the most common permissions for files:

The usual permissions for directories:

There are plenty of ways to change permissions of a file using the chmod command. However, our suggestion is to learn one of them and use it each time; in this situation, the numbering way.

Chown is a command that is used to change the owners of a file or a folder. The most basic syntax of the Chown command is this:

In this case, only the group owner has been changed to ‘clients’, leaving the owner unchanged.

There’s one way which should work with both commands, it is ‘–R’ in which the R stands for recursive.
This option allows you to replace the permissions or owners in the given directory and all other files and folders within that directory.

Different options for “chmod” and “chown”:

Using the skills we have taught you in this guide, you will be able to manage your Server or VPS in a more simple manner by changing permissions and owners of files and folders with a command line.

Tagged:diskLinux
0 Comments
No comments right now... Feel free to be the first one
Related Articles
How to Backup a Windows Server Domain ControllerHow to Install and integrate Rspamd postfixHow to Restore a Deleted File in Linux